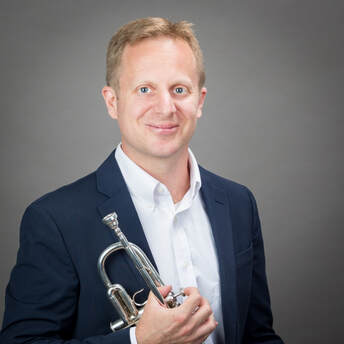 Jason Dovel joined the University of Kentucky School of Music faculty in 2013, where he is currently associate professor of trumpet. At UK, his responsibilities include applied trumpet lessons, trumpet literature, trumpet ensembles, Baroque trumpet, and the faculty brass quintet.  He serves as faculty sponsor of UK Education Abroad programs in Greece and Australia and is also founding director of the UK Summer Trumpet Institute, UK Baroque Trumpet Symposium, as well as the Certificate in Baroque Trumpet. During his 2021 sabbatical, Dovel served as Visiting Professor of Trumpet at Ionian University in Corfu, Greece. He has also taught at Northeastern State University, North Central Texas College, and the University of North Texas.

Dovel enjoys a busy schedule as a soloist and clinician, having appeared at more than 80 universities and festivals in the United States and abroad. He has recorded four highly acclaimed solo CDs; his debut album, Lost Trumpet Treasures, was released in 2014 as a collaboration with pianist Edward Neeman. The International Trumpet Guild Journal reviewer wrote, "On every track, Dovel's and Neeman's nuanced, stylistic interpretations and technical mastery are on full display." The American Record Guide described the disc as "spectacular" and praised Dovel's "full tone and terrific technical skills." The Brass Herald lauded the disc as "well-conceived and well-performed." His second solo CD, Ascent: New Music for Trumpet, was released in 2016 and features eight new works for trumpet, four of which are his original compositions. Of his third compact disc, Baroque Music for Trumpet and Organ (2018), the Historic Brass Society reviewer wrote, "This is a brilliant CD of some of the most wonderful works in the trumpet repertoire and [is] gloriously performed by Jason Dovel."

As an modern orchestral trumpeter, he is principal trumpet of the Lexington Chamber Orchestra, Lexington Theatre, and Kentucky Bach Society, and spends summers playing in the Charlottesville Opera Orchestra (Formerly Ash Lawn Opera) in Virginia. As a Baroque trumpeter, he regularly appears with many of the country's leading period instrument groups, including the Washington Bach Consort, Mountainside Baroque, Bourbon Baroque, Virginia Baroque, The Thirteen, and others. As a chamber music entrepreneur, he is a founding member of Quintasonic Brass, Clarino Collective, and the early music group Sonitus Clarissima.

A dedicated pedagogue with a passion for research in teaching, he has published twenty-five journal articles in the Music Educators Journal, International Trumpet Guild Journal, The Instrumentalist, and the Journal of the Art College of Inner Mongolia University in China.  He is also editor of The Big Book of Sight-Reading Duets for Trumpet, published by Mountain Peak Music.

Dovel serves on the Board of Directors for both the International Trumpet Guild and Historic Brass Society. He is a Yamaha Performing Artist.

Jason Dovel is grateful for the tutelage of many wonderful teachers, including Keith Johnson, George Novak, Charles Saenz, James Kluesner, Charlie Geyer, Barbara Butler, Barry Bauguess (Baroque trumpet), and Bruce Dickey (cornetto).
Jason Dovel has been a guest artist at more than 80 universities, conferences, and festivals around the United States and abroad. Here is a partial list: